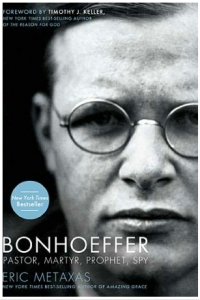 My son Adam gave me the new biography of Dietrich Bonhoeffer by Eric Metaxas for my birthday.  At 542 pages, Bonhoeffer: Pastor, Martyr, Prophet, Spy made  for good reading at the beach following Christmas.

As Metaxas guided me through those chilling years of Hitler’s rise and the ever-increasing persecution of Jews, I kept asking myself, “If I had been a Christian in Germany at that time, what would I have done?”

Would I, like Bonhoeffer and that small band of pastors in the Confessing Church, signed The Theological Declaration of Barmen, rejecting “Nazi Theology,” or would I, like the vast majority of “good” Christians, gone along with what was termed “German Christianity?”  Metaxas points out that many,  many Germans opposed the Third Reich, but felt it their patriotic duty  to serve in the military and not to resist the government openly.

Last Sunday Glenda Rabby gave a wonderful talk to the Inquirers’ Class at First Presbyterian Church, Tallahassee, about the role of churches and church leaders during the Tallahassee Bus Boycott and the Civil Rights Movement.  I was too young at the time to make adult decisions, but I remember the pressure my father faced as a pastor in Texas.

When Dad stood for Civil Rights, even in a modest way, he was vilified by some church members as a Communist dupe and a disloyal American.  Members of the John Birch Society came to our church and took notes during his sermons to make their case against him.  My parents received anonymous phone calls at the manse accusing them of being “nigger lovers.”

If I had been the pastor of a church in the South in those days, would I have had the courage to speak out?  To march with Dr. King?  To insist that racial segregation was contrary to the gospel?  To drive black voters to the polls?

In hindsight, the issues facing Christians in the 50’s and 60’s seem crystal clear.  At the time, however, things seemed more complicated.  The same is true today.

Leon County Supervisor of Elections Ion Sancho has become a voice crying in the wilderness regarding the recent restrictions on voter registration and early voting passed by the Florida Legislature  He told  a crowd on Martin Luther King, Jr. Day,

The argument that the new restrictions are merely a hedge against fraud by voters is an obvious sham.  It requires a willing suspension of disbelief to see the new law as anything but a means of suppressing votes by those who traditionally vote Democratic.  The effect of the law is to limit the votes of blacks and other minorities.  The law is not overtly racist, but then again, neither were the old poll tax laws.  These days you don’t have to be Bull Connor to keep non-whites from voting.

Preach on, Brother Ion!  You are a profile in courage.

I was born in Brownsville, Texas, grew up in San Antonio and in Lake Charles, Louisiana. I'm the pastor of First Presbyterian Church, Tallahassee, Florida.
View all posts by Brant Copeland →
This entry was posted in Church, Uncategorized and tagged Christianity, ethics, first presbyterian church, witness. Bookmark the permalink.