Posted on February 6, 2012 by Brant Copeland 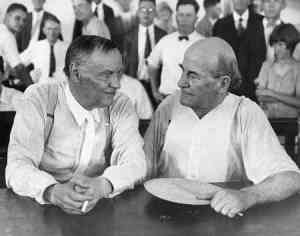 Fundamentalism comes in all shapes and sizes.  I’m most familiar with the Christian variety, but there are other forms as well.

Recently the Presbyterian Church (U.S.A) changed its constitution.  We removed language that functioned as a bar to the ordination of Lesbian and gay officers (ministers, elders, and deacons) and replaced it with language that states: “Standards for ordained service reflect the church’s desire to submit joyfully to the lordship of Jesus Christ in all aspects of life . . .”

This seems to me to be  a very high standard.  You’d think that submitting to Jesus’ lordship in all aspects of life would be challenge enough.  Some brothers and sisters are not happy about this, however.  One session (local governing body) wrote to Florida Presbytery:

We cannot mold scripture into something it is not simply for political or cultural whimsy, nor can we pervert it to accommodate sinful behavior without fear of impunity.  It is imperative that our church clarify in a righteous manner by putting into practice the teachings of the Bible as it pertains to fidelity and chastity for all leaders of our church.  We believe in the infallibility of the Bible and sacred truths it teaches us, both the Old and New Testaments, where we learn that these sins are clearly not the intended design of God’s perfect creation for a man and a woman.

(I think the writer meant either “without fear of penalty,” or “with impunity” but, you get the drift.)

Fair enough.  Don’t tamper with an infallible Bible.  The problem is, the Bible endorses lots of practices that modern Christians reject (beating your wife, killing your children for disobedience, polygamy, Levirate marriage) and forbids others that modern Christians accept (wearing clothing of differing cloth, touching women while they are menstruating, getting tattoos, divorce).

A little interpretation is called for, isn’t it?  But we tend to be rather selective in our interpretation.  Some bits of the Bible we keep in the file folder marked “infallible” and others get filed under “no longer applies.”  Clearly, the writer of the passage above thinks the Bible contains a blanket condemnation of sexual intercourse outside the marriage of one man to one woman.  The fact that it does no such thing is irrelevant.  We must stick to the fundamentals.

There’s also a political form of fundamentalism.  For the majority of the Florida Legislature, capping tax revenue is fundamental.  Thus, if  lawmakers manage to pass a bill requiring internet giants such as Amazon to collect sales taxes, the Governor won’t sign the  legislation unless it’s “revenue neutral.”  Whatever the right hand collects the left hand has to give back.

In other words, the State can’t possibly bring in more money for Early Learning, healthcare, or education, even if it’s money already owed under current law.  “No new taxes”(or even old taxes collected from internet deadbeats).  It’s fundamental.

Life among fundamentalists will always been challenging, no matter where you find them.

I was born in Brownsville, Texas, grew up in San Antonio and in Lake Charles, Louisiana. I am a Minister of Word and Sacrament in the Presbyterian Church (U.S.A.)
View all posts by Brant Copeland →
This entry was posted in Uncategorized and tagged Florida, fundamentalism, legislature, taxes. Bookmark the permalink.