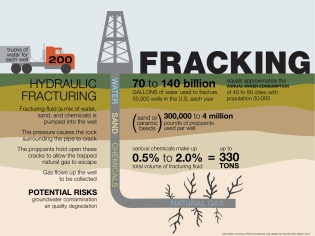 There are certain liabilities attendant to serving a church two blocks from the State Capitol.  Because of my proximity, I am (too) often asked to testify before Senate and House committees.  As Moses said to the burning bush, “If it weren’t for honor of the whole thing, I’d just as soon not go.”

However, I have agreed to address the Senate Appropriations Subcommittee on General Government this afternoon, January 25.  The Committee is taking up Senate Bill 318, which, among other things, declares null and void actions taken by local governments to ban fracking in their jurisdictions, and calls for a million-dollar study to see if fracking might be safe, and preserves as “trade secrets” the list of chemicals used in fracking.

Of course, the bill doesn’t speak of “fracking.”  It talks of “high-pressure well stimulation” — a much less volatile phrase.

I was asked to make the moral case against the bill — in less than two minutes.  So here’s what I plan to say to the good senators:

Thank you for your service. According to John Calvin, public service like yours is the highest form of service – far above that of pastoring a church.

I stand in a religious tradition that affirms that “The earth is the Lord’s and fullness thereof . . .” (Ps. 24). You and I are not the owners of creation. We are the stewards of creation. As stewards, we are responsible to God and to our neighbors to manage the earth’s resources with regard to the good of all.

We do not need a million-dollar study to tell us what is already known about what the bill calls “high-pressure well stimulation.” The harm caused by fracking is already well documented in peer-reviewed studies. The jury is not out on this matter; it simply is the case that fracking cannot be done safely. The questions in this bill regarding groundwater pollution and harm to general health have already been answered, and to maintain otherwise is either misinformed or, frankly, disingenuous.

This bill overrides the decisions of elected officials who have already declared a ban on fracking in their jurisdictions, undermining the will of the people who elected them and undercutting their proper authority. It also prevents ordinary citizens from knowing what’s being injected into the earth beneath their feet.

You may not share my religious conviction that we humans do not own God’s creation. But, as members of the human race, regardless of your religious convictions, you owe it to your fellow human beings to protect them from the harm that fracking clearly causes. You have this obligation not only to this generation, but also to our children’s children for generations to come. In other words, all of your true constituents have yet to be born.

God will not thank you and me for doing our job as stewards of the earth. That’s our job. But I do thank you for weighing this matter in a morally responsible way.

7 thoughts on “Who will testify?”