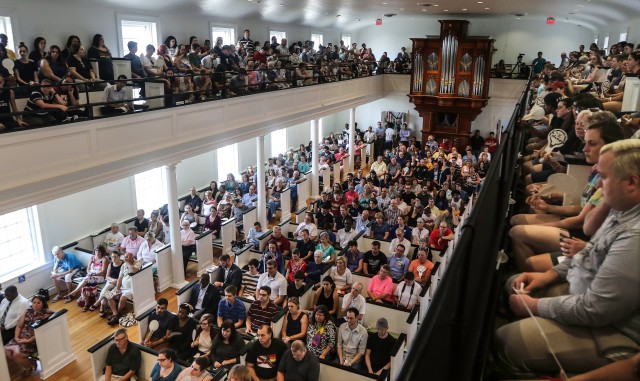 Last night First Presbyterian Church hosted a vigil in response to the shooting in Orlando.  Sponsored by Equality Florida and several other LGBT organizations, the vigil was scheduled to be held on the steps of the Old Capitol, the go-to place for public rallies in Tallahassee.  However, the Capitol Police were fearful that Monday’s temperature, which hovered near 100 degrees, might make an outdoor vigil risky.  At our church’s invitation, the vigil was moved to First Presbyterian at more or less the last minute.

Some folks in the LGBT community were uneasy about meeting in a church — and for good reason.  The church has not always lived up to the radical hospitality called for in the Good News of Jesus Christ.  Our own sanctuary, finished in 1838, has not always been a place of welcome and inclusion.  The bricks in the walls of Old First were made on Col. Richard Shine’s plantation.  Richard Shine was an elder in the church and a slave owner.  The sweat of injustice is baked into the fabric of this old meeting house. The slaves of church members, although included on the Roll of Communicate Members, were required to sit upstairs in the north gallery.  They could share the sacrament with white folks, but they couldn’t sit next to them.

Still, the church was a true sanctuary — at least for some.  During the Seminole Indian Wars the building was a designated refuge for women and children.  A clearing around the church provided defenders a clear shot, should there be an attack.  That clearing served as a fire break in the great fire that destroyed most of downtown on May 25, 1843.  If it hadn’t been a “sanctuary” in a physical sense, the church would have burned along with the rest of downtown.

The Pulse Nightclub in Orlando was a “safe place” — a “sanctuary” —  for many in the LGBT community.  It was the one place where people felt safe to be themselves — until last Sunday, June 12.

Our role in the vigil was strictly one of hospitality.  There was no prayer and no liturgy.  I gave a welcome, touching briefly on the history of the church and confessing the need for repentance on the part of Christians.  I told them, “In the name of Jesus Christ, you are welcome.”

That is by no means everything Christians need to convey to LGBT neighbors.  But it just might be the first thing.

I was born in Brownsville, Texas, grew up in San Antonio and in Lake Charles, Louisiana. I'm the pastor of First Presbyterian Church, Tallahassee, Florida.
View all posts by Brant Copeland →
This entry was posted in Uncategorized. Bookmark the permalink.