Posted on September 4, 2018 by Brant Copeland 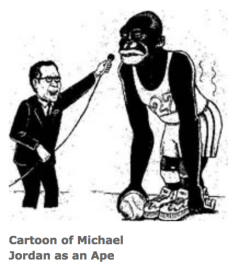 Last week I participated in a press conference called by the Rev. Mr. R. B. Holmes of Bethel Missionary Baptist Church.  At that conference, Mr. Holmes called upon Congressman Ron DeSantis to apologize for saying, in response to Andrew Gillum’s nomination for Governor, that the people of Florida should not “monkey this up” by supporting Mr. Gillum’s economic policies.

Rev. Holmes acknowledged that Rep. DeSantis did not call Mr. Gillum a monkey. However, he pointed out that “The term ‘monkey,’ from our Afro-centric, psychological, theological perspective, is highly offensive, and has historically been used in a very derogatory context.”

Rev. Holmes was being kind.  The association of the word “monkey” as a derogatory reference to people who come from Africa has a long history in Western cultures, reaching all the way back to Plato and Heraclitus.

Christians in the Middle Ages considered apes devilish figures who represented lustful and sinful behavior, and often equated people who lived in Africa with simians.  Some of the drawings accompanying the 1935 trail of the Scottsboro Boys – nine black teenagers accused of having raped two young white women – depicted a monstrous black simian figure baring its teeth and dragging off a helpless white girl.  (If you’re thinking that’s an image right out of the film “King Kong,” you’re right.)

After the press conference, one of the African-American pastors told about serving in Viet Nam.  He said he was asked by Vietnamese villagers to show them his tail.  Even today, black athletes report that they have had bananas thrown at them as a racist gesture of contempt.

How Mr. DeSantis could earn degrees from Harvard and Yale without becoming aware of the racist associations of that word “monkey,” I do not know.  I will take him at his word that he meant no harm.  However, having been educated about the hurt that word causes, he most certainly should have apologized for using it in reference to a black man.

Words matter.  When I returned from the press conference, my land line answering machine coughed up a disgusting racist robocall put out by a Neo-Nazi group.  You can bet that that group had no trouble picking up on Mr. DeSantis’ “monkey” comment.  Even if he didn’t “get it,” they certainly did.

We could all benefit from Proverbs 12:18:  There is one whose rash words are like sword thrusts, but the tongue of the wise brings healing.

I was born in Brownsville, Texas, grew up in San Antonio and in Lake Charles, Louisiana. I'm the pastor of First Presbyterian Church, Tallahassee, Florida.
View all posts by Brant Copeland →
This entry was posted in Uncategorized. Bookmark the permalink.